The exact origins of field hockey are unclear, but there is evidence that ancient Egyptian cultures played a variation of this ball-and-stick game 4,000 years ago. Modern field hockey was shaped in England during the 18th and 19th centuries and was introduced to the United States in 1901 when Constance Applebee, an English physical education teacher, attended a conference at Harvard and taught the game at many local women’s schools. Internationally, field hockey is primarily a men’s sport; however, in the United States, it is almost exclusively a women’s sport.

Object of the Game

To hit the ball from within the striking circle, through the opponent’s goal, to score points. The team with the most goals at the end of the game, wins.

Field hockey games are divided into two halves, each lasting between 25 and 35 minutes, depending on the level (high school varsity is 30 minutes). If the score is tied at the end of the game, some leagues allow the game to end in a draw; other leagues use one of several overtime methods. Most commonly, teams play a 10-minute sudden-death overtime period: the players are reduced from 11 to 7 players per team to create scoring opportunities, and the first team to score, wins. If neither team scores during overtime, penalty strokes determine a winner. Each team selects five players to each take one penalty stroke; the team that scores more goals, wins.

Start of the game:

Alternating at the start of each half and following each goal, one team starts play with a center pass. The two teams line up on their respective sides of the field, with the ball in one player’s possession at the center of the field. Defenders must be five yards away from the ball; when the whistle blows, the player hits the ball to start play.

11 players on each team attempt to move the ball toward their opponent’s goal to score. Players hit the ball up the field and to teammates by dribbling, pushing, flicking, scooping, hitting, and driving the ball. Goals can only be scored when an offensive player hits the ball from within the striking circle, 16 yards from the goal. Many goals are scored during “fast breaks,” when the attacking team can gain an advantage over the opponent in number of players as both teams approach the goal. Other scoring opportunities occur when players cross the ball, or hit it towards the center of the field in front of the goal, in hopes that a teammate can deflect the ball or shoot it into the goal. A player may also take an outside shot from within the striking circle if an opponent is not guarding her closely.

Defensive players mark opponents and attempt to tackle the ball as the offense moves up the field. Since players may not touch the ball with their bodies, defenders often lower their sticks parallel to the ground to widen the area in which to stop the ball during a pass. If the defense takes possession of the ball in front of its own goal, it will attempt to clear the ball, or move it up-field away from the goal. Defenders may not contact the offense; however, all players have an equal opportunity to pursue the ball, so an offensive player cannot turn her body or use her stick to block an opponent from the ball or she will be called for obstruction.

A shot that is taken from within the striking circle and passes through the goal is worth one point.

Shots that are taken from outside the striking circle, but deflect off of an offensive player within the circle, also score a goal.

The primary equipment in field hockey is a stick and a ball. The stick has a flat side and a rounded side. Players may only hit the ball with the flat side, or the “striking surface,” of the stick. Players also wear protective equipment, including mouth guards, shin guards, and optional face protection. Uniforms consist of a jersey, a skirt or shorts, and knee-length socks. The home team usually wears a light jersey and the away team wears a dark jersey. Goalies wear a different color jersey than their teammates, as well as additional protective equipment, including goalie pads, chest protector, facemask, throat protector, and other optional padding.

Two umpires govern the game to ensure fair and safe play. The umpires signal action on the field, such as starting play and indicating goals. Umpires also enforce penalties, which include advancing, blocking, tripping, raised ball, pushing, charging, obstruction, and playing with the wrong side of the stick (players can only use the flat side). When a penalty is committed, umpires blow a whistle and signal the penalty. For most penalties, a free hit is awarded. The non-offending team is awarded the ball at the spot of the foul, and all opponents must stand at least five yards away from the ball. The hitter must hit or push the ball, and may not play it again until it has been touched by another player. Note: umpires sometimes use discretion and allow play to continue during a penalty because of the “advantage” rule, which states that a penalty is only called if the offending team gains an advantage by committing the violation or in cases of dangerous play. This rule greatly speeds up the pace of the game. 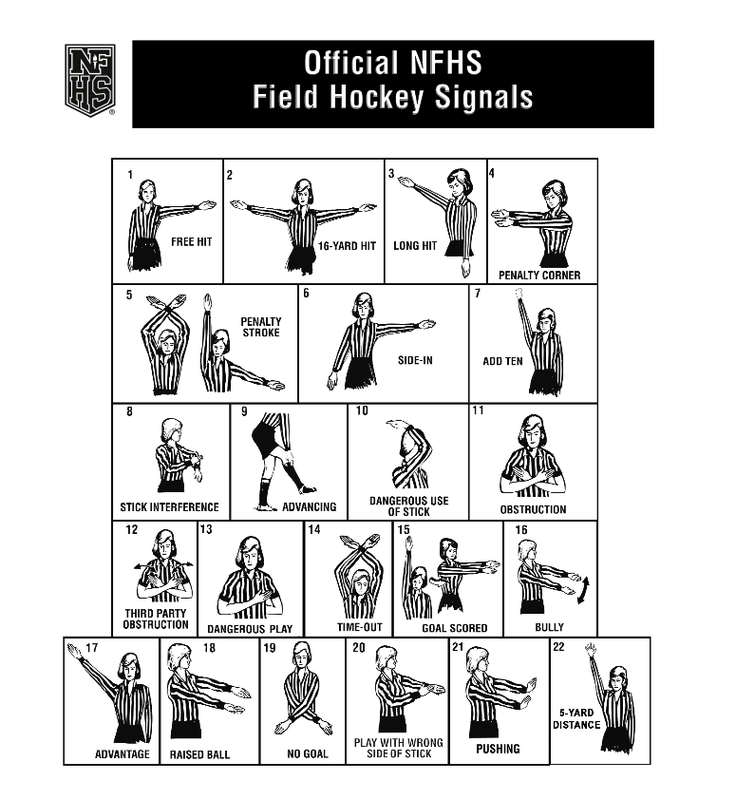 A field hockey field, often called the “pitch,” has some important markings:

Sideline: Boundary along the length of the field. Balls that cross the sideline result in a side-in.

End line: Boundary along the width of the field. Balls that cross the end line result in a long hit, penalty corner, or 16-yard hit. The goal-line is the part of the end line between the goal posts.

Center line: Divides the field in half.

25-yard line: Intentional fouls between this line and the end line result in a penalty corner.

Substitution area: Substitutions may take place during the game through this area only. The player must exit the field before her replacement enters the field.

There are 11 players on the field per team, including the goalie and 10 field players. Formations often consist of four forwards, three halfbacks, three fullbacks, and one goalkeeper, known as a 4-3-3 formation. Variations, such as the 5-3-2, are also used, depending on the coach’s strategy.

Forwards: Primary scorers who spend most of their time between the midfield and the opponent’s goal.

Midfielders: Must be able to play both defense and offense and have the stamina to run the field in the transition between offense and defense. Also called “links.”

Fullbacks: Primarily defend the opposing forwards and attempt to clear the ball when it gets close to the goal. Some coaches assign a single defender, called a “sweeper,” who plays closest to her own goal behind the fullbacks.

Goalie: Stands in front of goal to block shots with her body and stick. Must have quick reflexes and ability to communicate defensive strategies to teammates

16-yard hit: Free hit for the defense 16 yards from the goal after an offensive player hits the ball over the end line.

Add-10: For delaying the game, such as a defender standing closer than five yards away during a free hit, the free hit is advanced 10 yards up the field.

Advancing: Penalty for field player hitting the ball with any part of the body.

Bully: Used to restart play when possession is unclear when play was stopped (e.g. injury timeout). Two opposing players start with their sticks on the ground, the ball is placed between them, and they must tap sticks above the ball before they can play the ball.

Clearing: Hitting the ball away from the goal on defense, usually as a pass up the field.

Cross: Passing the ball in front of the opponent’s goal to create a scoring opportunity. Also called “centering.”

Dangerous play: Play that could likely result in injury, such as pushing, tripping, or raising the ball at an opponent who is less than five yards away.

Drive: A hard hit made with the swinging motion of the stick.

Flagrant foul: Intentionally rough or dangerous play. Player is issued a red card and ejected from the game.

Flick: Pass or shot using the wrists to put force behind the ball to raise it off the ground.

Free hit: Awarded after most penalties. Defenders must stand five yards from the ball until it is played.

Hit: Any contact with the ball using a swinging motion of the stick. A hard hit is called a drive.

Long hit: Free hit for offense from the corner, following an unintentional hit over the end line by the defense. Also called “long corner” or “corner hit.”

Obstruction: Penalty for using the body or stick to prevent opponents from pursuing the ball. “Third party obstruction” is called for blocking an opponent so a teammate can play the ball.

Penalty stroke: Free one-on-one shot from the penalty stroke line awarded when a foul prevents a likely goal. The goalie must remain behind the goal line until the ball is hit.

Push: Method of moving or passing the ball in which the stick is in contact with the ball and the ground as the player pushes the ball up the field.

Raised ball: Flicking, scooping, and chipping the ball into the air are legal. Undercutting or hitting that leads to dangerous play are penalties.

Scoop: Method of passing or shooting the ball by leveraging the stick underneath the ball to pick it up and fling it through the air.

Side-in: Free hit awarded to a team after the opponent hits the ball out of bounds over the sideline. Also called “hit-in” or “push-in.”

Striker: The player who shoots the ball.

Tackle: Defensive effort to take the ball away from an opponent.

Undercutting: Penalty for a hard swing of the stick under the ball to raise it into the air.

Goggles that meet NFHS requirements; ASTM F2713-09
This list is not meant to be a complete list 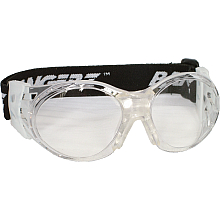 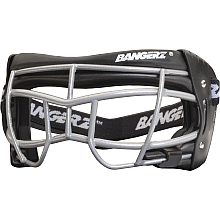